NOVEMBER 5, 2012: Note 2 of 6 – Greece’s deep economic crisis has led to a revolution in the traditional structures of mass politics. New Democracy (Tories) won elections in 2004 and 2007, and were in office as the crisis struck its first blows. October 4, 2009, they were swept out by a newly resurgent PASOK (social-democrats), as voters turned to the traditional party of the workers’ movement and the left in the face of the clear failure of conservative politics. But PASOK’s social democracy proved equally bankrupt. The only “solution” PASOK (and New Democracy) could come up with, was to agree to two so-called “bailouts” supervised by the “troika” – the European Central Bank (ECB), European Commission (EC) and International Monetary Fund (IMF – a €110 billion “bailout” in May 2010, and another €130 billion “bailout” agreed to in February 2012.

The word “bailouts” is put in quotation marks, because what in fact is being bailed out is not the Greek government, let alone the people of Greece, but rather financial institutions, particularly key European financial institutions, which stood to lose heavily should the Greek economy go under. So – while the second bailout agreement involved a “forgiveness” of 70% of the debt owed by the Greek government to certain key lenders, it came with a key condition that the Greek government’s first priority was to use the money advanced to keep servicing its still massive remaining debt. A European Commission report outlining the nature of the conditions wrote: “the government has expressed the intention of adopting legislation giving priority to the debt service vis-à-vis other cash outflows” (European Commission 2012, 45). The bailout money does not go into the pockets of Greek workers and the unemployed. The bailout money is “recycled” from the European Central Bank and the IMF in particular, back onto the balance-sheet of key financial institutions (Fontevecchia 2012).

For PASOK, the situation is even worse. In three of the four elections held between 2000 and 2009, it won just over 3 million votes. But having accepted responsibility for the austerity packages designed by European and international bureaucrats as part of the “rescue” of the Greek economy, PASOK saw its base evaporate. In May of 2012, it could not even reach the one million voter threshold. In June it just barely held on to three-quarters of a million voters. Between 2004 and 2012, more than two million voters had abandoned the traditional party of the trade unions and the left. The social-democratic pillar of mainstream politics has been eroded to an even greater extent than the conservative pillar.

The rise of SYRIZA (the Coalition of the Radical Left) is the other side of this picture. This is a political formation with roots in the Greek communist tradition. Its activists have been prominent in the big movements of the 21st century – anti-globalization, anti-war and (since 2007), anti-austerity. Inspired by the occupation of Tahrir Square during the Egyptian Revolution of 2011, a worldwide rebellion against capitalism took shape through the various “Occupy” movements. Its Greek counterpart was “the movement of the squares,” and SYRIZA was a key part of that movement. SYRIZA combines, then, both an electoral presence and an activist presence in the mass movements, a distinct break from the passivity of traditional social-democracy.

Through the elections of 2009, SYRIZA’s vote was fairly modest, ranging from just over 200,000 to just over 350,000. This did not even mark SYRIZA as the most popular of the parties to the left of PASOK, being surpassed in every election by the votes of the KKE (the Greek Communist Party). But this changed dramatically in the election of May 6, 2012, when SYRIZA’s vote soared to just over one million. In the election of June 17, 2012, that total soared again to over 1.6 million, SYRIZA winning more than twice as many votes as PASOK, and trailing by only a few thousand the winning total of New Democracy. There has clearly been a pronounced shift to the left in Greece, with hundreds of thousands of voters moving from PASOK to SYRIZA. 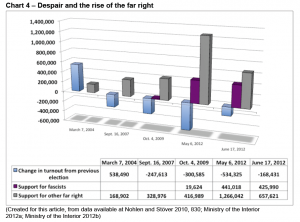 But the crisis in Greece has not simply produced a move to the left. Chart 4 shows this very clearly. First, with each passing election fewer and fewer people have even bothered to vote. The voter turnout in June 2012 was fully 1.2 million below that of March 2004, this in a country where the electorate is just over 9 million. So while one million have turned left towards SYRIZA, an equal number have turned their backs on electoral politics altogether. This evidence of mass, political disengagement is extremely worrying. More worrying still has been the advance of the right. Just over a decade ago, a useful analysis of the Greek left could make the following claim. “It is interesting to note that as of 2002, no successful extreme-right party had emerged in Greece” (Kalyvas and Marantzidis 2002, 690). This is no longer the case. In the election of 2009, an openly neo-Nazi party, the so-called “Golden Dawn”, entered the electoral arena, winning just under 20,000 votes. But by May of 2012 that total soared to 440,000. When a Golden Dawn member physically attacked a left politician on television, many presumed that this would lead to a collapse in its vote. These hopes proved illusory, Golden Dawn keeping the bulk of its votes. In fact the truth is, Golden Dawn has built its base through violence – racist violence – feeding on and encouraging a situation where there have been literally “thousands of attacks against immigrants” (Marchetos 2012). It is also not the only new right-wing party in Greece. A proliferation of splinter-right parties has developed, some basing themselves on extreme Greek patriotism, others on a politics of scapegoating immigrants. The total vote for these splinter-right groups topped 1.2 million in May of 2012. 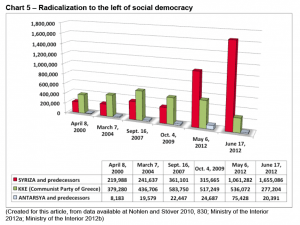 Finally, to complete the picture emerging from these six elections, Chart 5 maps the changing contours of politics to the left of social democracy. Traditionally, that left has been a terrain dominated by the KKE, the Communist Party of Greece. The chart shows that as recently as 2009, the KKE outpolled SYRIZA, winning more than half a million votes. But in the turmoil of 2012, almost half of those votes have disappeared, undoubtedly in their majority moving to support for SYRIZA. ANTARSYA, the Front of the Greek Anti-Capitalist Left, is a third important component of the left-of-PASOK. In 2004, 2007 and 2009, ANTARSYA slowly increased its support from just under 20,000 to just under 25,000. In the election of May 2012, its vote tripled to 75,000. However, in the very polarized campaign of June 2012 it, like the KKE, saw many supporters move to SYRIZA, ANTARSYA’s result returning to the 20,000 vote level.

The big parties have lost millions of supporters because of their inability to deal with the crisis of Greek society. There has been an important coalescing of the left, and SYRIZA has emerged as a legitimate player on the terrain of mass politics. But there has also been the emergence of a hardened far-right threat, violently profiting from the stew of chauvinist and anti-immigrant politics churned up on the right of the political spectrum.

Previous in the series
Notes on Greece 1: Economic Crisis

Next in the series
Notes on Greece 3: the KKE

This note is one of six. The six notes have been published together as  “Greece in the eye of the storm (the Greek left, SYRIZA and the limits of the concept of ‘left reformism’)” Links, November 18.